Skelly’s angular frame bent down to pick up the object. His head bulged with forbidden law. His recently acquired companion, a small fellow named Devious, rotund like a bumble bee, with black paws, craned forward to see what he had noticed and stretched out one of his black paws. “What is it, Our Kid?” he said, feigning indifference.

Skelly brought the item up to his face, to see it more clearly. “It’s got a name on it. Here, have a look.” He handed it up to the impatient figure seated imperiously on his shoulders and turned and took a few steps, and looked up at the sky. In the azure blue a miniscule dot was orbiting with almost imperceptible movement. “I reckon it’s come off that,” he said dreamily.

“Nah, Skelly!” Devious snorted. He handed it back, derisively. “It’s a love token. You see them everywhere.”

“Are you sure?” Skelly looked at it again. Now he could see a small screen. A moving burst of static, and in it a face centuries old mouthing words no longer discernible. He held it to his ear, but could hear nothing.

“You might as well throw it away,” said his small friend. “Come on, we’ve got a dozen miles yet to kill.”
Skelly held on to the thing, uncertainly.

His companion had first come to him in a dream. Skelly had stopped at an inn, and taken one of the huts in the hostelry’s picturesque grounds. In the morning, another resident, who had arrived during the night, spied him taking the air after breakfast – and ran angrily at him!
Unfathomably, in the way of dreams, Skelly knew he and the rotund newcomer had once been friends. He also knew he had badly hurt the man in some unknown way, and the man had cut off their friendship. They had not seen one another since.

Coming across one another accidentally like this Skelly knew the man was intent on venting his spleen. But in the way of dreams he also knew this man, and what his problems were, and at the same time didn’t know him. Either way, he saw there was no point running. He must wait and face whatever it was he had to endure, whether it was rightly his to endure or not, and he braced himself.

But as the furry bundle ran up to him, instantly attacking him, the punishment was not as bad as Skelly had thought it was going to be. In his dream the man had fallen on him with a vengeance – yet Skelly had hardly felt the angry pummelling in his torso! Instead, a soft cuddly bear had wrapped himself around him, and sank itself into him, and beat out its fury, surprising him with its gentleness. Devious, for that had been he, hadn’t wanted to hurt him but just show how bitterly he felt at have been betrayed (as he thought).

He had been like a love ball, Skelly decided, as he threw the token back on the ground.
The day after the dream, they met one another in a bookshop, browsing through the magazines. Whatever had occurred between them, if it had, if the dream was true, they were now reconciled again.
Skelly pulled up his jacket collar against the wind, and looked up concernedly at his friend. “Do your coat up, fatso,” he said with affection. He knew Devious had once been very ill, and didn’t want to make any more mistakes with him. He felt as though a yawning gap had been filled. If indeed the dream had been true, and they had now found one another again, he wanted everything to be just right.

Until I had this dream I did not know how to announce that my publishing partner of fifty years, David, had died. Art is by Kris Guidio, who drew Dave and I together in so many different ways. 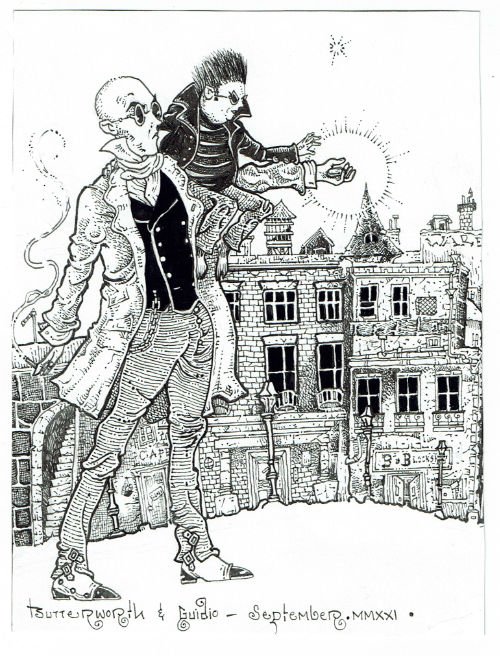 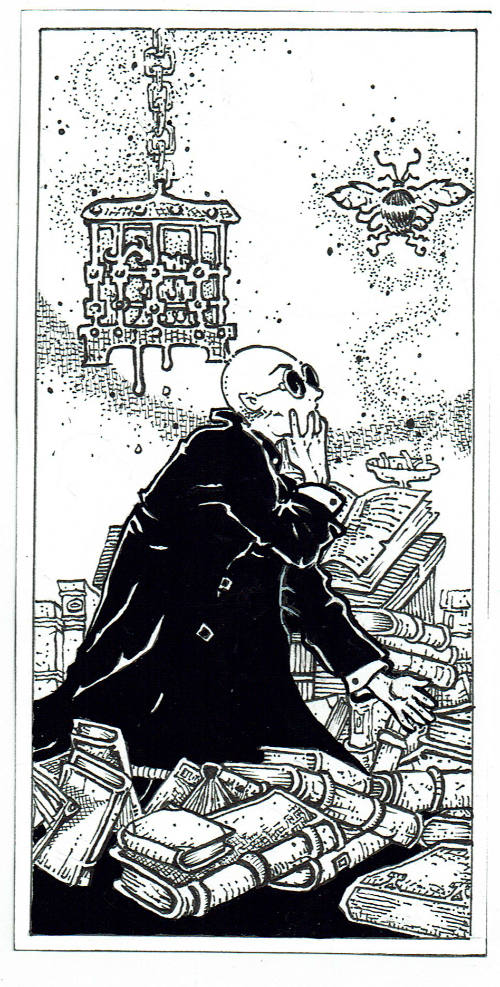