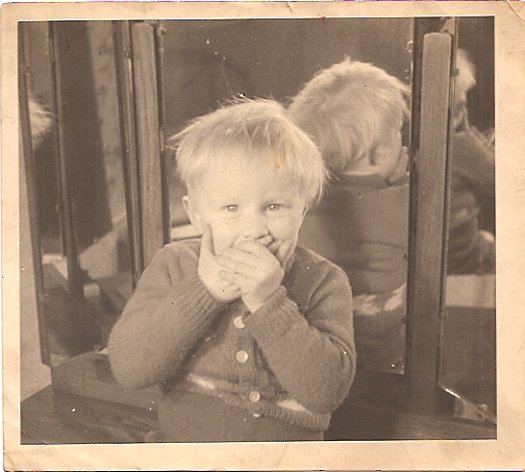 The start of it. Aged between one and two.

Michael was born in Manchester UK in 1947. He was educated at St Christopher School, Letchworth Garden City, a co-educational, democratic and Quaker-run refuge. 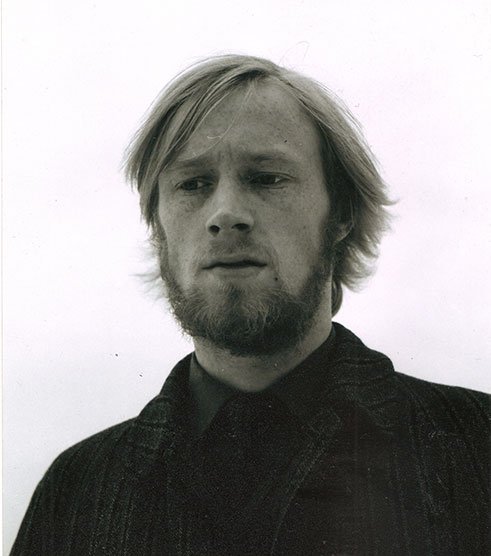 He started writing short fiction in 1966 for the English science fiction magazine, New Worlds after Michael Moorcock took over the editorial seat. Moorcock was intent on turning New Worlds into the mouthpiece for a more literary kind of science fiction then emerging, and Michael (Butterworth) quickly became one of the younger exponents of the New Wave of science fiction, as the movement became known.

He continued contributing to New Worlds until the editions most closely associated with Moorcock finished in 1979. 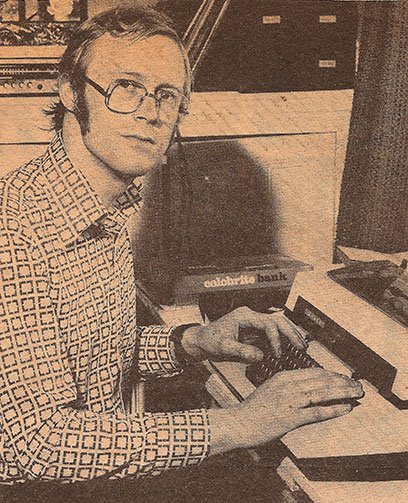 A single parent with two children, in 1976 Michael tried his hand at writing fantasies, the first being The Time of the Hawklords (with Michael Mooorcock, who had no hand in the writing; the novels were founded on Moorcock’s idea, merely), based on the stage performances of Hawkwind, and the last being The Edge of the Infinite, a novelisation of the Year Two Space 1999 television series in 1977.

Michael’s work as an editor and publisher started in 1968 with the small press literary magazines Concentrate, Corridor and Wordworks.

His attempts to get his publications into more shops resulted in a filmset glossy make-over of the less-produced Corridor. The result, Wordworks, became the butt of Martin Sutton’s strip, run in the October edition of anarchist Mike Don’s underground magazine Mole Express.

The appearance of these magazines on the racks in his home city led to an encounter with David Britton and the joint founding of the book-publishing company Savoy Books in 1975.

The co-authoring and co-editing practice Butterworth & Britton established, or B&B as they became known, produced two anthologies, The Savoy Book (1978) and Savoy Dreams (1984) as well as David’s first novel Lord Horror in 1989. 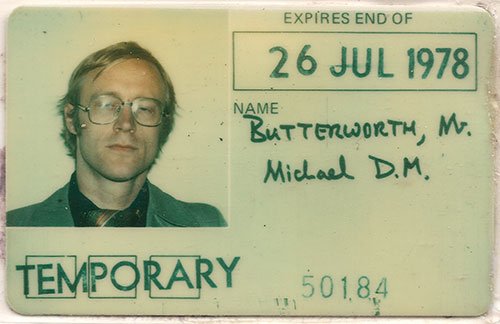 1978 Researching for Savoy Books at the British Library 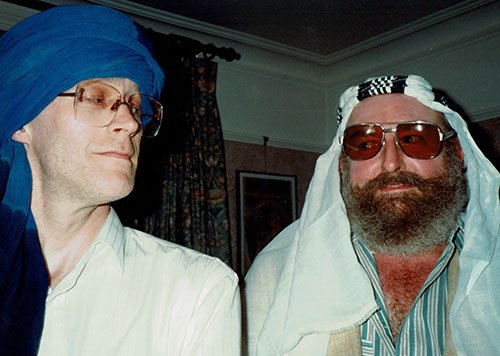 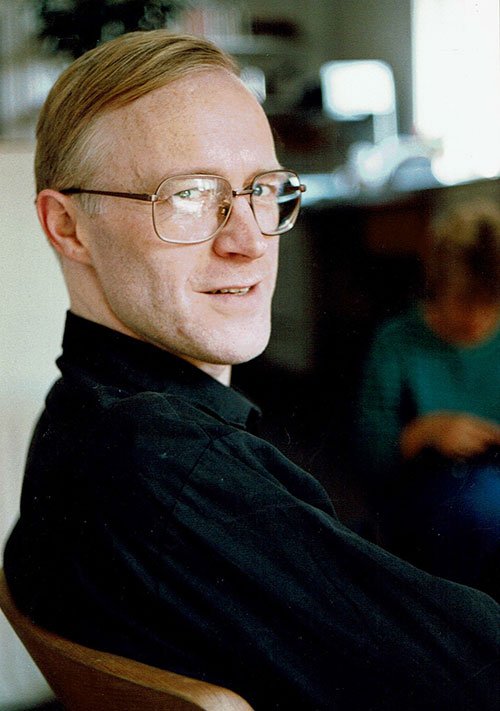 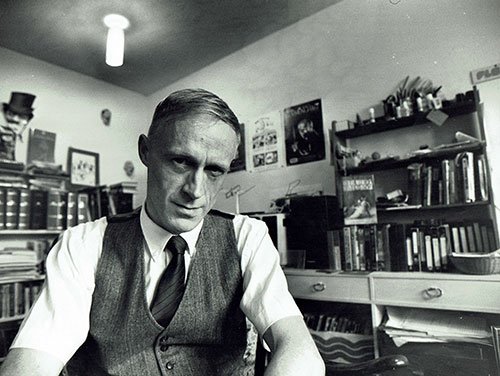 1992 Defending Lord Horror at the court of appeal. Guardian Newspapers.

The two were also publishing books (later comics and records), opening and running shops and fighting court cases, the most notorious being the successful defence of Lord Horror from a charge of obscenity led by Michael in 1992. He continued campaigning against the use by police of the ‘Section Three’ laws until the end of the century. Laws that had been devised to control pornography in Soho were being used by police forces nationwide (but particularly in Manchester) to suppress other works. 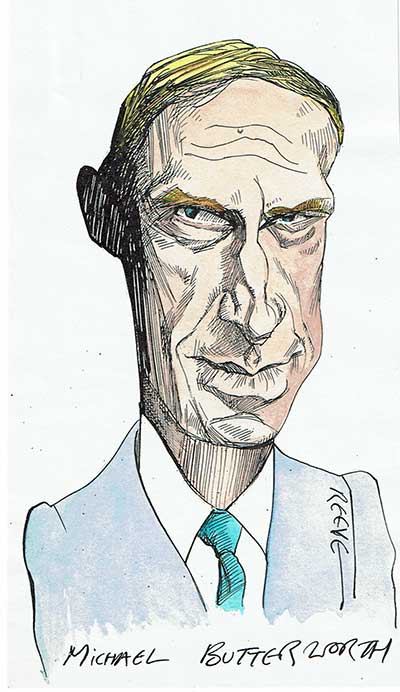 1996 Caricature by Mark Reeve for a one-off Fiftieth Anniversary Issue of New Worlds. 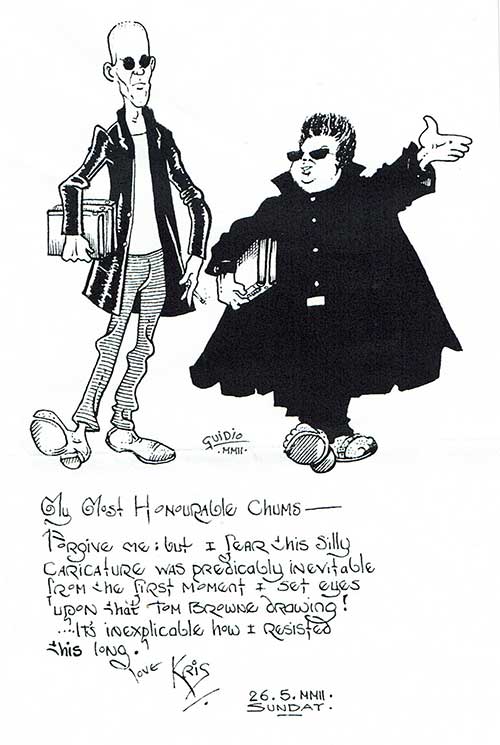 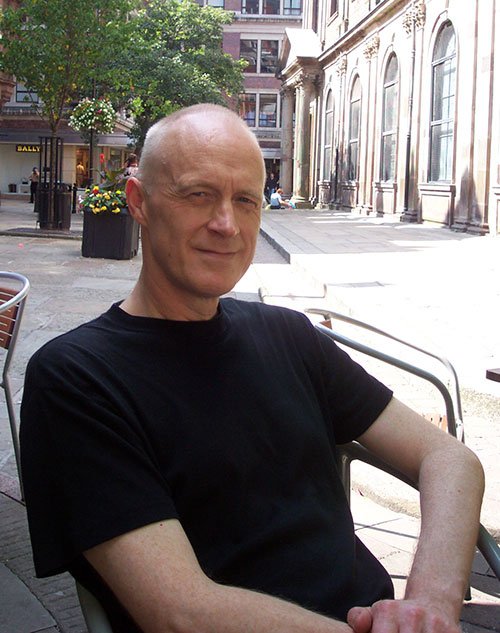 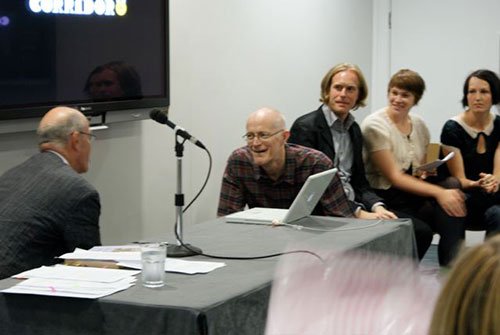 2009 Speaking with Iain Sinclair at the launch of Corridor8. Photo Harry Dutton.

In 2006 Michael began a short experiment in print-on-demand publishing, a venture that led in 2009 to him starting a new journal, Corridor8. This was partly a re-launch of Corridor (which had run to seven editions almost forty years early), but with the focus now on contemporary visual art. 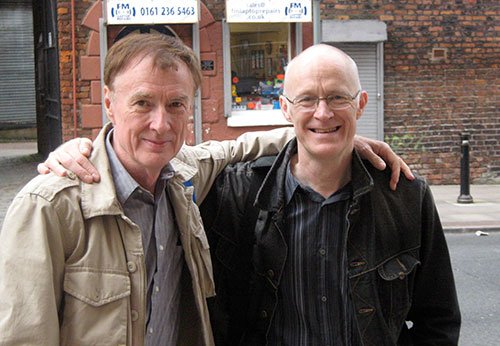 Back in 1965 Charles became graphic designer at New Worlds, introducing Michael to Michael Moorcock and overseeing his contributions. Later, when Moorcock took a back seat, Charles became the journal’s editor. 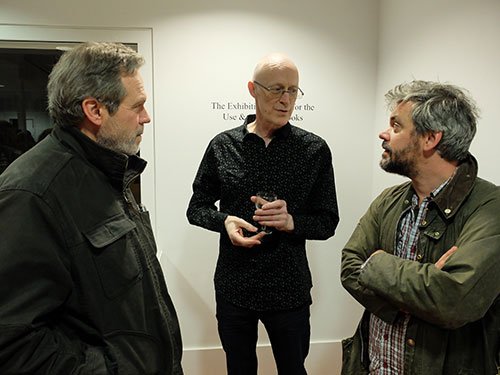 2014. With authors and curators Jay Jeff Jones (left) and Douglas Field at the launch of Butterworth. Photo Robert Carter.

A revival of interest in the New Wave in 2014, particularly The Science Fiction New Wave at Fifty Conference at East Anglia University in May, was followed in August by Michael’s first solo exhibition at the International Anthony Burgess Foundation, Manchester. Butterworth was staged by the artist collective The Exhibition Centre for the Use of Books, and showed how his early writing and editing practices had developed. In January 2015 the exhibition travelled to Kent State University, Ohio.

In September that same year Michael took part in a group exhibition at Modern History III curated by Lynda Morris, at Bury Art & Sculpture Gallery, Manchester, where he presented a wall-mounted display of New Worlds from the period 1964-1979. A separate video installation by art filmmaker Clara Casian recorded him in conversation with Bob Dickinson discussing the help J G Ballard had given him in 1966 as a young author. Ballard had shown him how to ‘sub’ work in the manner of William Burroughs, going so far as to demonstrate the technique on two of Michael’s works, ‘Concentrate 1’ and ‘Concentrate 2’, condensed ‘novels’ that subsequently appeared in New Worlds. Ballard was at the time working on the pieces that would became The Atrocity Exhibition. 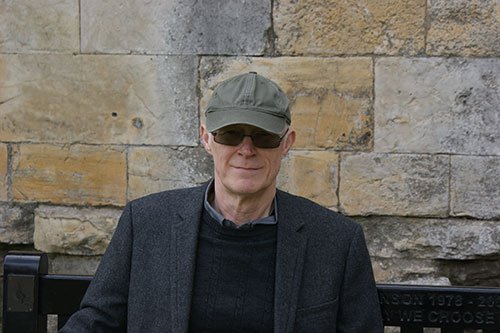 In 2016 Michael’s attention turned once again to music, with his book The Blue Monday Diaries, a non-fiction account of the making of New Order’s ‘Blue Monday’ in which he makes the case that ‘Blue Monday’ is arguably a product of New Wave of SF. The book is a memoir of both the recording session that Michael attended with the band and of alternative Manchester in the days of Factory Records and Savoy Books when the punk and post-punk Manchester music proponents of the day, including Tony Wilson, Joy Division and New Order, patronised the ‘Savoy’ bookshops. 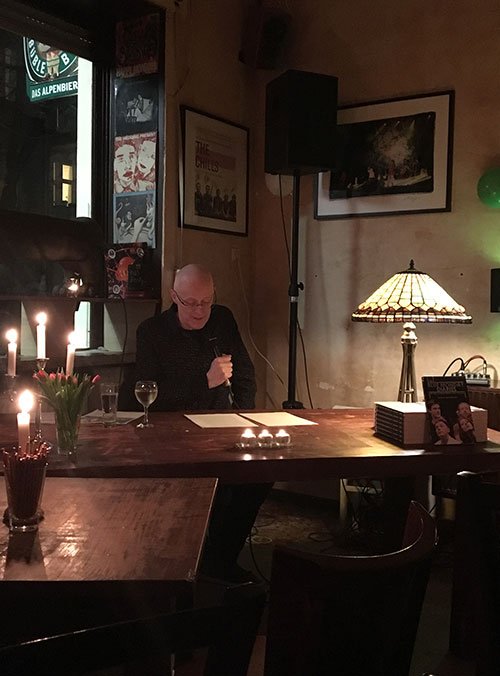 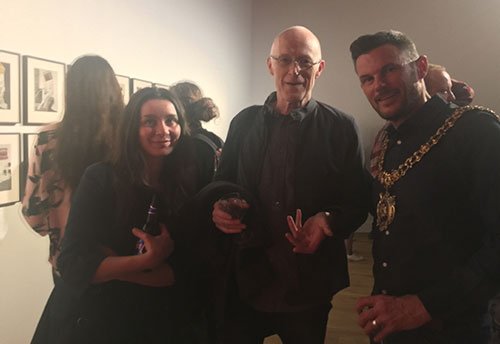 Two works of retrospective fiction are appearing in March – Butterworth, a collection of Michael’s New Wave-era writing, and My Servant the Wind, a short novel based on his 1971 writing notebooks.

Michael is presently at work on The Sunshine Island, an autobiographical biography of his father who had OCD. He regularly contributes fiction, poetry and non-fiction to Emanations journal, and lives in central Manchester with his wife Moksavadini.

Other websites with info about me